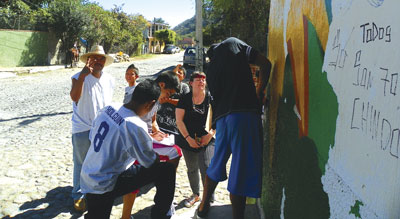 Boys of the Hood discussing the repair and prep. of the wall for the new mural.  In their midst, visiting artist Gail Hodder.  Boy with the clip board is El Jefe (chief).

A follow-up on last month’s article about the “Boys on the Roof”.

“Heroin is an opioid drug that is synthesized from morphine, a naturally occurring substance extracted from the seed pod of the Asian Opium Poppy plant.  Heroin can be injected, sniffed or smoked, which delivers it rapidly to the brain.  When it enters the brain, it is converted back into morphine, which binds to molecules on cells known as opioid receptors.” Source: National Institute of Drug Abuse, Update: Nov., 2015.

Prescription opioid pain medications such a Oxycontin and Vicodin can have effects similar to heroin when taken in doses or other ways than prescribed, and are the most abused prescription drugs.  In addition to the effects of the drug itself, street heroin contains toxic contaminants that can clog blood vessels, causing damage to vital organs.

Some addicts have taken up heroin because it is cheaper and easier to get than prescription pain killers. The National Institute also states: “Prescription drugs over-the-counter, after marijuana and alcohol, are the most commonly abused drugs anywhere used by anyone over the age of thirteen and in some cases, younger. Other abused drugs are Adderall, Concerta and Ritalin (used for ADHD disorder).”

The boys on the roof came down to earth last week, and sat outside the Community Center smoking marijuana.  There were young ones inside the Center, and the smell of the weed was sickly, sweet and heavy.  Discussions were held as to whether to call the police to get them to move on, or to talk, and the latter approach was taken.  The reason they had left the roof was because they needed the benefit of the Center’s Wi-Fi.  It was explained to them that they were welcome to it, but they could not smoke where there were children, and then leave their waste in front of the Center.

Later, on returning to the Center, we found the boys sweeping up the road in front of the Community Center.  Then, they asked if they could clean off the graffiti and repaint the peeled mural on the wall.  So, these angels who “fly too close to the ground” had reached out to give back.  Today, the 15th of January, they have re-affirmed that they will repair the wall.  Just give them the tools – that is all they need.  Once they put their signature on the wall, it is safe for all time from graffiti.  We have agreed that they take the old mural off, resurface the wall and put a Tepehua mural on.  One created by the gang that grows bigger all the time for this project.  The gang of Tepehua will own it.  These boys, who spend their afternoons on one of the roofs of Tepehua smoking dope, are coming down to earth . . . and want to do this. They no longer smoke marijuana outside the Center as they did before, because they want to latch on to the Wi-Fi and they respect the kids inside.  This is a break-through to reach those teens who are falling so hard through the cracked streets of Tepehua.