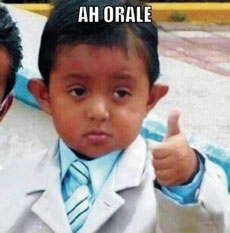 Arriving at Lakeside, I had studied Spanish for three months, and I couldn’t wait to try out my computerized learning program.  But I had been studying Castillian Spanish, not Mexican Spanish. It took me three years to understand why the young man in the grocery store turned red and snickered when I earnestly asked him “Donde estan tus huevos.” I just wanted to know where the eggs were. Later someone explained that “huevos” also stands for a certain part of the male anatomy in Mexican slang.  Mexicans have a lot of words like that!

Slowly I began to learn Mexican Spanish, when a Mexican street dog adopted us. I had never thought about dogs “speaking” Spanish. But Oso, our mellow giant of a dog soon became bilingual and could understand what I was saying in English. Years later, we adopted another dog. He only speaks Spanish. So my husband, who cannot speak Spanish, would call him, he wouldn’t come, or sit, or do what we asked…until I started commanding him in Spanish. Problem solved.  Now he’s become “my” dog because my husband will say “You call him, he listens to you.” But make no mistake, when “Daddy” gets a certain tone in his voice, Baxter suddenly seems to understand more English.

There are many things I have learned to love about the language. For instance, I can spell very well in Spanish. I may not be able to pronounce the word, but chances are I can spell it. Every letter is pronounced.  I love that.

Things I don’t like about Spanish-- Just because one word in the sentence is plural, the entire sentence must be plural, same with masculine and feminine. I keep asking and no one can tell me who gets to decide that a television is feminine or masculine, and how can one tell? And don’t even get me started on word order.

Recently I had to purchase a different car. I like this car. The cars I’ve been driving have been made in the ‘90’s, and now I’ve gone to the next decade. It’s computerized and gives me messages…in Spanish.  Between the idiot lights on the dash, and the warning bells, I can usually figure out what the screen is trying to tell me. The manual is in English, that’s a relief, but I still can’t understand what “dicc. hydral” means other than there is something weird that effects the steering when that message comes up.

The most confusing thing for me is that so many of the Spanish words have more than one meaning. The champion for me is “orale.”  I asked a Mexican friend of mine what orale means. She shrugs her shoulders as she tells me it can mean many things. “Orale” can mean “I agree with you.” But also “bring it on” or “come on” or “yes” or “hurry up” or “that’s amazing” or “I’m astonished” or “there you go” or “OK” or “It’s your turn” or “go ahead” or “I’m waiting for you”  or “watch it.” That’s 14 definitions that I can come up with. There may be more. This is worse than a politicians promise!

But no matter what language you speak, remember that people are always listening. I was at the beauty shop in my neighborhood. I was the only non-Mexican there. The women were talking and assumed I didn’t know what they were talking about. Then one woman said something extremely negative about her husband. And I laughed. Then the whole beauty shop laughed because they didn’t realize I could understand them. I can understand much more Spanish than I can actually use.

But people forget that Mexicans can understand more English than they let on. In a restaurant, I heard two women talking. I hadn’t meant to overhear, there was a lull in the ambient noise. I heard them discussing their maids and gardeners, making generalities about their work. Did they really think that the Mexican employees of the restaurant really didn’t understand what they were saying? Don’t be fooled. As my grandma always said “If you cannot say something nice about someone, don’t say anything at all.”  I wish I hadn’t heard what those women said.