Anyone Can Train Their Dog

By Art Hess
This email address is being protected from spambots. You need JavaScript enabled to view it.

Working in the Street 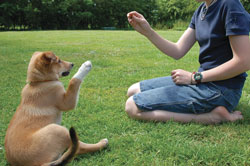 A while back I was working with a seven month old German Shepherd male who was well past his basics and we were into what I like to think of as “working in the street.” Once the dog understands and performs the basics such as come, sit, down, stay, and heel, I like to proceed to working the dog in a variety of environments so he learns to focus and handle many different situations and distractions. My ultimate goal is to have the dog working comfortably in a park or plaza. My next step then is to incorporate extended walks in a heel position with frequent stops, downs, sits, stays, etc. This way the dog doesn’t become soured with dry repetitions plus he learns to utilize the various exercises in a practical way.

One day Shep and I were working along a somewhat rural road and we came upon a man and his dog who were tending to about a dozen Nanny goats and their kids. As we approached the flock I asked Shep to sit so he could relax and observe. After a moment or so we moved a little closer and I directed him to assume a down and to watch the goats. The man with the herd was watching and came over and commented on how well the dog was doing. He said he had watched the dog on previous occasions and liked his progress. We chatted about the goats and I commented on a particularly attractive baby that was ivory colored with several seal brown patches. The man asked if I liked goats and I explained that I came from a farm background and have a fondness for all animals and their babies.

He then said come with me and he struck off toward a shed that was several hundred yards away. We entered a small fenced enclosure and I asked about bringing the dog in and he said oh yes it’s not a problem and besides it’s good for him. By now he had swung open a rickety door and ushered us into an area that was alive with hen and chicks, ducks with ducklings, and off to one side was a Momma goat with a very young baby. By now I had Shep sitting beside me and was allowing him to be on a loose leash but I was watching nervously to make sure that he wasn’t going to devour a chick or a duckling.

The man was over by the baby goat and picked him up and brought him over to us and I thought it was for me to see him but instead he quietly told Shep to lie down and he laid the baby goat across Shep’s back and shoulders, told him to look after the baby and he stood up and left Shep there. By now Shep was as shocked as I and he looked up at me for assurance that this was an okay thing and I simply told him he was a good dog.  The man then explained that this is how he taught the dogs to accept the baby animals and not to bother them in the future. Soon the baby was returned to his Momma and the man gave Shep a pet and congratulated him on doing so well with his first lesson.

That was an unexpected bonus to “working in the street” and I can assure you that for all the time I was lucky enough to work with Shep I never saw him make one wrong move toward any farm animals.