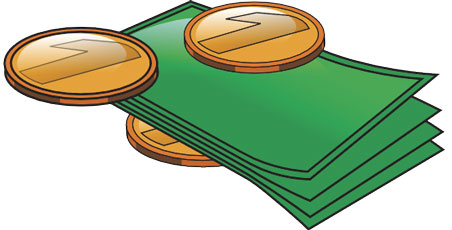 Why don’t food and other consumer prices ever go down? Everything else goes up and down in value, but not consumer prices. For many seniors, this issue has become an extremely important one.

I speak first-hand. Because taking into account every penny I have for retirement, I estimate that I could afford to live comfortably until the end of the next calendar year. Anything longer would require me to forage for food and ferret out a secret home in someone’s tool shed. And for health care, I would just have to close my eyes and take placebos, seeing as they do only slightly worse than most of our regular medications, and they are much cheaper. And some can even freshen your breath.

As the new year speeds on and the value of our peso remains slumped, we need to understand what’s going on in the macroeconomic world, which of course is made up of the analytics and calculus underlying the Group of 8 or 20 luncheons.

As we all know currency exchange rates go up and down. Why? Economists are of differing opinions. Some say, “Who the hell knows” and a second, more conservative group insists, “The problem goes back to the ‘New Deal.’”

Yet, a third group tells me: “It’s because your currency is too weak (or too strong, Goldilocks) against major currencies like the yuan renminbi, which is the official currency of China, the new economic powerhouse. And when a major currency like China’s explodes in your face like an airbag, all of a sudden, your wallet shrinks and some of us have to move to tiny countries whose economy is based on trading root vegetables.

China in the past liked to devalue its currency and make their products cheaper than anybody else’s, confusing global investors and central banks all over the globe. Some countries, Afghanistan and Khazatstan, for example, hit back hard: They devalued their currencies in response (causing no end of heartache). Oddly though, these countries are making an ingenious point. I will take this point up in a moment.

Another thing the Chinese Communist Party, who is really the world’s hottest closet capitalist, does is to pretend it’s still a staunch socialist system that doesn’t need to kowtow to Western economies. To demonstrate this, they still control a vast number of state-run companies, and promise to continue funding their “research and development” programs, which means increased investments in cyber-hacking U.S. companies.

No, I’m not picking on the Chinese.  So don’t go writing nasty letters about me. It happens to be true. Remember, even Christ slapped around the “money changers.”  But let’s hand it to the Chinese. It’s also a fact that they invented banknotes. In the year 812, applying another of their own inventions, paper (which was made from old linen rags discarded as litter [if you’re thinking ancient underwear, you’re absolutely right]). Anyway, how about this: The word the Chinese used to name this original banknote was “cash.” But what’s the big deal, if we’d invented it, that’s what you or I would call it.

Today, with their extraordinary production efficiency, China’s currency is now on a status with the U.S. Dollar, as a “reserve currency.” A “reserve currency” means a lot of countries collect certain currencies because they’re dependable and because you see them in suitcases in a lot of heist movies.

Interestingly, in the late 18th century, the Mexican Peso was the “reserve currency” for all North American countries. In fact, the U.S. Dollar was valued at a rate comparable to the more dependable Peso, so that the new United States made a bigger fuss about holding pesos than dollars. Pesos were gladly accepted across America for decades – setting the stage for the Taco Bell franchise.

But there are other considerations for currencies hoping to enter the hallowed ground of “reserve currencies.” They have to show up in more heist movies, for one thing. And they have to look valuable. Some currencies have only buildings on them, like the ruble. The Russian ballet building with a statue of Apollo is on the ruble. If you’re going to use grand structures and symbols on your currencies, history has it that pyramids topped with a giant eyeball is the way to go. Also, certainly, the Russian ruble can’t become a security reserve because the bills are in cyrillic letters and look more like the writings on crashed alien spacecraft than money denominations.

Further, to be a reserve currency, it also helps if people know what your country’s currency is called. For example, if I wanted to invest in money market funds or speculate on the currency going up or down from an up-and-coming country like Zambia, I would have to know to invest in kwachas, and hope that the kwacha gathers economic kwacha steam, by which I mean Warren Buffet packs his portfolio with kwachas, and goes on telling everybody if you’re not in kwachas, you’re going “to lose a billion dollars” (Buffet thinks everybody loses money in that bracket).

Besides their importance for speculative investments, understanding this business of exchange rates or “currency fluctuations” (as we experts like to call them) is also vital to the traveling consumer: Consider this, “What would your Russian Rubles be worth in the U.S.”  At one point, Russia had a banknote of 500,000 rubles. One bank note. Try handing that to a New York cab driver--or, a clerk at an abarrotes here in Ajijic. If our Russian visitor wanted a Bimbo snack here, he would have to purchase the entire store, because there’s no way he’d ever get change.  Okay, I exaggerated. I checked it out and discovered that you could buy a Bimbo snack here with an old Soviet 500,000 Ruble banknote because (by current equivalences) the banknote is worth about 200 pesos. But you still probably wouldn’t get change.

One last yet vital economic point. You mustn’t forget that currency values can fluctuate considerably from day to day.  One day, 50,000 Iranian “Rials,” for example, might buy you a deluxe sailing ship and the next day, a box of baking soda. That’s how tricky this stuff is.

What about the latest recommendation to invest in gold via home storage, you’re asking. This doesn’t solve anything: you can’t spend gold, unless your name is Blackbeard.  I suppose you could hand a waiter an IOU written on a napkin and say, “Hey, that’s backed by my gold reserve and I promise, whenever you need it, it’s there in my vault.”  But good luck with that.

Now, here’s the amazing solution for currency fluctuations, based on the brilliantly conceived actions of the aforesaid few small nations: If all currencies responded as China used to do, by devaluing their currencies all at the same time, every product or service everywhere in the world would have to come down in price. The playing field would be level and bottomed out for sellers and traders and everyone could afford their Cherrios again. The only other crazy thing any country could do, in order to counter that, would be to apply a favorite financial plan perfected by North Korea: “forced labor.” (Yes, it’s been everywhere, I know, but most of humanity has put it behind us.)

The downside here? Regrettably, ministers of finance from countries who adhere to the rules of the International Monetary System can’t devalue their currencies on a whim. This wouldn’t be fair to the rich people who already paid big bucks for certain currencies at freely-traded, market prices in true capitalist fashion; and capitalism, as we all know, is always totally fair to everybody, even the rich. So, as always, our problem is the rich. They screw up everything—even Bimbo prices.

What to do? If you wish to purchase a box of Cheerios these days, you have to sit down with a financial advisor and devise a financial plan.