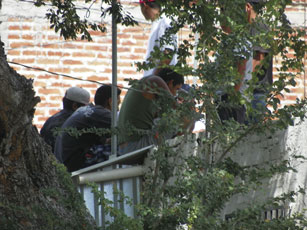 Roof tops of Mexico are usually flat (azoteas), with a small parapet enclosing wall, creating a place less visible to the neighbors and not easily accessed by strangers. In the 1920’s in Mexico City a “cuertos de azotea” typically housed workers of the people who lived below. The hovels of Tepehua have flat roofs, a place for dogs, laundry and storage...or small pot (as in small round container, or not) gardening, raising rabbits or other small livestock.

It is also used by the young men as a meeting place, where the roof affords them privacy to use, buy or sell drugs, and they have a good view of the surrounding area for any approaching danger, and maybe it gives them, as Alfonso Reyes put it “a feeling perhaps, at this height, somewhat liberated from the burdensome human environment.”

According to a nationwide alliance of social organizations, at least 30,000 children are involved with drug related crimes because of economic or social necessity. Are they criminals or victims of abuse?  When children or teens are picked up for drug related crimes they are treated as criminals here in Mexico.

Sociologist Jose Luis Cisneros stated “Children are easy prey for organized crime because they lack opportunity. Socially the children use violence as a way to get respect, something denied to their families.” Morales states, “A youth criminal justice law does not exist. There is a proposal in congress but even that one has serious omissions.”

Over the last five years 41,515 drug related deaths have been reported, 2.5% were children. The main drugs of choice being cocaine and crack cocaine, heroin in the form of ‘black tar’ and ‘brown heroine’, marijuana, and methamphetamine. Along with the “Club Drugs” which include Ecstasy (MDMA), LSD, Rohypnol, PCP, Ketamine, and GHB.  Raves are a venue for MDMA.

There are no facilities in the Mexican system for the very young offenders.  One Tepehua juvenile case was 12 years old.  His Mother an ex-user, could no longer handle his violence when he was using, so he was picked up and sent to the men’s half-way house holding tank.

As stated before by this writer, the Santa Cruz Rehabilitation Center houses its youngest inmate at 12 years old.  This is a child in an institution of adult males. He is lucky; they take good care of him. Other institutions are not so carefully monitored.

A local methamphetamine factory lost their sixteen-year-old son to the very drug they sold on the market, but they are still selling. This Author watched an arrest in Tepehua on Sunday Dec, 13th. It took four burly Policemen to subdue an 18 year-old youth, high on whatever it was, that gave him the strength of ten men.

Yet further up the hill at the Tepehua Center there was a Christmas party for the children going on; the fun and laughter, the Christmas tree and Santa Claus.  Painted faces and happy smiles, games, gifts and pop corn balls, and everyone looking forward to the Christmas store that will be open on the 18th of December at the Tepehua Center, where the barrio people can buy new toys, clothes and other things with vouchers they have earned through the year by volunteering.

A brief respite from the mean streets of Tepehua.