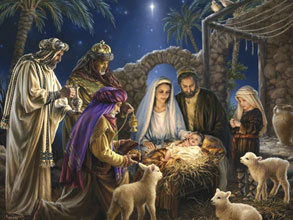 For Christians, Christmas is about the birth of the Christ Child, the descent of the Divine into the field of time. Only two of the four Gospel authors, Luke, a physician and companion to Paul, and Matthew, an unknown editor who collected and published the writings attributed to the Apostle Matthew, have much to say about the birth of Jesus.

The narrative is heavily laden with prophetic dreams and visitations by angels bearing both good news and ominous warnings. When an angel informed Mary that even though she was still a virgin, God had chosen her to bear a son, she responded with unconditional acceptance of her unique role and all the tragedy that it would bring. Mary would most likely have been in her early teens, engaged to the carpenter Joseph, probably an older man. According to Biblical scholar Kenneth Bailey, when Joseph learned of Mary’s condition, the Greek term “enthymeomai,” with its root “thymos.” would have described his reaction. The word can mean that he “considers” the situation or that he is enraged and fuming. We can assume the latter.

Joseph can only conclude that his betrothed has been unfaithful to him. The penalty for her presumed infidelity is death by stoning, a penalty reserved, it seems for female offenders, rather than male ones and, by implication, approving of one form of abortion. We are told that Joseph was a just man. If he was a just man in accordance with the mores of his society at that time, he would have cast Mary aside and left her to her fate. His justness, however, was of a higher order, one of compassion and mercy. Then, we are told, he was informed by an angel in a dream that Mary’s condition is not a consequence of fornication but an act of God.

When the order came down for all citizens to return to their place of birth for taxation purposes, Joseph was accompanied by Mary, by then in an advanced state of pregnancy, on the 70 to 100 mile journey by donkey to his hometown of Bethlehem.  Perhaps he took her along to prevent her stoning by a self righteous mob.

Numerous theories have been advanced over the years to explain the phenomenon known as the Christmas Star, such as a supernova, a comet or even the planet Venus. Johannes Kepler suggested that a conjunction of the planets Jupiter and Saturn, occurring in 7 BC and recurring in 6 BC, could have been the cause. Some ancient Middle Eastern astrologers believed that a new king would arrive during a conjunction of Jupiter and Saturn in the constellation Pisces, the sign of the Messiah. Recently, Dr. Michael Molnar of Rutgers University has advanced the theory that the spectacle was caused by moon eclipsing Jupiter on March 20, 6 BC.

All sorts of folk were streaming into Bethlehem, and vacancies in local inns were non-existent. Still, Joseph was well known in Bethlehem, and was also a descendent of King David. He had status. The young couple would have been invited in for the duration but not given a room because all were taken.

Most depictions of the birth of Christ would have us believe that he was born in a drafty stable surrounded by bedazzled livestock and that Mary suffered the pangs of childbirth alone. This is highly unlikely. Mary would have had the assistance of midwives inside the main building. In the Middle East of that time, the stable was separated from the human living quarters by a wall, with openings through which mangers, actually bins or troughs, could be filled with grain for livestock. The family horse, cow, donkey, sheep or goats need only poke their heads through the openings in order to feed. Not an ideal situation from the standpoint of 21st century Western standards of hygiene and comfort but not as primitive as most illustrations would have us believe either.

According to Luke, the first to visit the infant Jesus were shepherds who had been grazing sheep on nearby hillsides when a chorus of angels informed them of the birth of a new king. Shepherds were among the lowest members of society, poor, often homeless, wild men who lived beyond the pale. Luke emphasizes that Jesus came for those who exist on society’s periphery, not just mainstream Jewish citizens. Even as we review Joseph’s genealogy, we find male and female, good people and bad people, Jew and gentile: Rahab the harlot; Tamar, who seduced her father-in-law; the widowed Ruth who fell in love with the kindly Boaz; Bathsheba who carried on a tempestuous affair with King David.

The presence of shepherds grazing sheep debunks the commonly held view that Christmas occurred on December 25. Due to heavy frost during the winter months, sheep and other livestock would not have been put out to graze until spring. December 25 was not recognized as Christmas on the Roman calendar until 354 AD. December 25 was the end of the festival of Saturnalia, a time of frenzied celebration when Christians would have been relatively safe from persecution if they wished to honor the birth of Jesus. December 25 was also the celebration of the Roman Day of the Unconquered. Jesus was most likely born in the month of March.

The assumption that Three Magi visited the infant Jesus originated with the three gifts they are said to have offered: Gold, frankincense and myrrh. Keen astrologers, they may have hailed from Babylon. More recent scholars posit that they may have arrived from Arabia. Gold was being mined in Arabia at the time. Frankincense, a resin extracted from the Boswellia sacra tree, and myrrh, derived from the Comminphora tree, are both products from the southern shores of Arabia. Both were valuable commodities used in perfumes, incense and medical treatments.

It is said that the Magi stopped by to visit King Herod on the way and that the scheming monarch requested information as to the exact location of the “newborn king”. Instead, hoping to evade him, they found a different route for their homeward journey. In a rage, Herod, insanely jealous of any potential threat to his rule, ordered the murder of every male child in the neighborhood of Bethlehem. The historicity of such an outrage may never be verified, but the tempestuous Herod was not above ordering infanticide or much of anything else.

Like many political leaders, past and present, with age he slipped into megalomania. He once ordered that two of his favorite sons be strangled to death. He had the favorite of his ten wives, Mariamne, killed because of suspected political disloyalty. Afterward, he would roam the palace by night, demanding that his servants bring her to him, and then order them beaten when they failed to do so.

When a group of Pharisees expressed opposition to his argument that he was actually the long-awaited Messiah, he ordered the lot of them executed. As an old man, Herod recognized that he was hated and feared by the populace and that there would be rejoicing at the time of his death. He ordered the arrest of every prominent subject and demanded their execution upon news of his death, so that there would be mourning in the land. The executions were not carried out.

There are estimates that 14,000 male infants were slaughtered by Herod’s order. Given the sparse population of the region at the time, 20 would be more accurate. Almost none of the warm, fuzzy Christmas stories make mention of the horrendous fate of the Holy Infant. Joseph, warned in a dream, spared his young family this horrendous fate by setting out for the Egyptian seaport city of Alexandria, where there lived a large expatriate Jewish community.

Prior to their departure, Jesus was presented at the Temple in Jerusalem to the venerable Simeon, who prophesied that the infant was set for the fall and rising of many in Israel and warned Mary that a sword would someday pierce through her soul—dire portents. The shadow of the cross looms over the manger scene. Yet, the darkness of Good Friday is followed by the promise of Easter.

The stories underlying the popular scenes of  Christmas should remind us that Jesus entered a world of deprivation and violence, that he arrived in poverty and later departed in poverty,  that he was to suffer hardship, rejection, condemnation, torture and execution; that even as an infant, he was a refugee in a strange land.