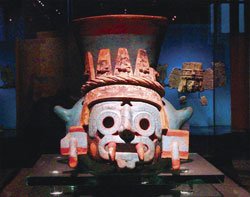 My Spanish teacher, Herlinda Diaz, told me a remarkable story known to most Mexicans but hardly any foreigners. It began when Herlinda was maybe six or seven. One day she and her classmates boarded a school bus for a field trip to Coatlinchán not far outside Mexico City. Near the village, lying in a dry stream bed, the kids saw a huge gray stone with carvings on it and a good deal of graffiti.  They climbed up on the stone’s surface and cavorted and laughed and shared some snacks.

Years later, an archeologist identified the colossal megalith as a pre-Hispanic statue of Tlaloc, the Aztec god of life-giving rain and, by extension, agricultural fertility.  Tlaloc lay sleeping in that ravine for five centuries.  Standing 23 feet tall and weighing 168 tons, it is the largest existing monolith in the Americas.

About the time it was identified as Tlaloc, the National Museum of Anthropology was under construction in Mexico City.  The archaeologists decided that the great rain god Tlaloc, as important as Quetzalcoatl, the Feathered Serpent, should grace the museum grounds at its very entrance.  And so they entered into discussions with the village elders (more like orders) and laid out their plan for bringing Tlaloc to the capital for a very public showing. Their first task—the engineering task—was figuratively Herculean.  Lengthy preparations involving hundreds of people ensued.

The giant statue was finally raised by sixty steel cables in order to be placed on an especially built trailer transport for its final journey.  But during the night local hombres snipped enough cables to sabotage the plan.  They insisted that the removal of Tlaloc would cause the rains—and thus life itself—to cease.  To avoid further resistance, federal forces were called in, and government negotiators and archeologists sat down with the pueblo fathers to resolve the age-old struggle between tradition and change.  Finally, an agreement was reached.  The leader of the village addressed his people and assured them that Tlaloc would be pleased with his new home and persuaded them to let him leave on his long journey.

On the morning of April 16th, 1964, in the middle of a heat wave, the good folks of Coatlinchán watched the national treasure leave its centuries-old home.  The accord they reached with the government included a road, a medical center and of course electricity, all of which have since been received.

It was way past midnight when Tlaloc arrived in Mexico City.  Yet the Zocalo thronged with at least 25,000 people. The city was lit up as if for a fiesta; traffic came to a halt.  Herlinda told me that she witnessed people falling to their knees in supplication, crossing themselves and even ululating.  Ironically or not, the arrival of the rain god was greeted by the heaviest rainfall ever recorded in that ordinarily dry season.  The statue now stands guard at the entrance to the National Museum of Anthropology and has become the symbol for this world-class museum.  He is solemn, he is imposing and he is majestic.  He is the great god Tlaloc.

Post Script: It’s a good thing Tlaloc was sleeping when Herlinda and her classmates played on his stomach. Had he been upright and sentient, he would have demanded child sacrifices just like he did 500 years ago. A simple trade of blood for rain.

Yale Professor of Anthropology, Michael Coe, writes, “One of the more horrifying of Aztec practices was the sacrifice of small children on mountain tops to bring rain at the end of the dry season, in propitiation of Tlaloc.  It was said that the more they cried, the more the Rain God was pleased.”

Imagine the horror visited on Fray Diego Durán, a Spanish priest, upon learning that children were to be sacrificed, slain by an Aztec priest! Fray Diego writes that “the blood was collected by the high priest who then bathed the face and body of the idol Tlaloc. If there was insufficient blood, another child or two, ages six or seven years, was slain accompanied by the sound of many trumpets, conch shells, and flutes.” This ritual performance each spring took place atop Mount Tlaloc.

Meanwhile, in Tenochtitlan (Mexico City today) a little girl “dressed in blue (Tlaloc’s color), representing the great lake and other springs and creeks” waited, terrified in an enclosed litter. Upon hearing the joyful trumpeting from on high, men transported the little girl by canoe to an auspicious spot where they slit her throat, allowed her blood to flow, then cast her into a whirlpool spiral that swallowed her body.

Archaelogist Isabel Gutiérrez reflects on the practice:  “They were supposed to be killed for the god. At death they became his companions.  Some here had a jade bead in their mouth to serve as their heart in the afterworld.  It was good if the child cried very much at the sacrifice. Their tears represented rain. The children (sometimes as young as three months), the mothers and fathers—everyone must have cried.  We found the skulls and only half of the ribs and an arm and a leg.  The bodies were dismembered before they were placed here.” What became of those small remains? We can only imagine… Perhaps an ancient Aztec midwife should have the last word, a word of joyful welcome, then, a word of warning: