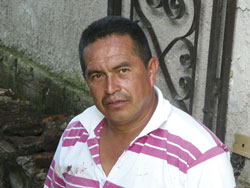 Drugs.com states: “There is no absolute number of drinks per day or quantity of alcohol that defines alcoholism”.  Tolerance varies between men and women and even nationalities. One can be drunk on 2 beers and another can drink 2 bottles of wine with no outward effect.  What happens inside the body is another column.  Alcoholism comes from a combination of biological and environmental influences. Does alcoholism cause poverty or does poverty cause alcoholism?  The answer, of course, is both. One can drink oneself ‘into the poor house’, or in the depression of poverty, go to alcohol for solace.  Each is as devastating as the other because, in the end, you still lose everything, including life.

Juan Jesus had the world on a string, living in America with a wife and two children and a job.  His marriage and dreams were shattered because of continued drinking, which he started at 14 after the divorce of his parents because of alcoholism.  Returning to Mexico, having lost everything in America, he moved into the Tepehua barrio to start over.  He married again, but his alcoholism became worse and he once again was alone, living in a house where he had sold the door and windows to feed his habit, causing his wife and children to flee.  Juan kept sliding into a hell of his own making.

Watching someone die of sclerosis of the liver, in poverty, in a home environment with no medical care is enough to scare the devil himself sober.  The body becomes twice its size and the victim drowns from the inside.  If hospitalized, machines to the work of the liver.  It is something we do not want to think about, and neither did Juan, but he had to care for the victim.  It scared him straight into the Rehabilitation Center of Santa Cruz.

The Rehab. Center was built by addicts of all kinds.  When you check yourself in, after a few months you can get a pass to go out and work or see family.  If you are committed by relatives or by the police because of a vagrancy charge, there is no checking out for quite a long time, and only with a doctor´s clearance.  In Juan’s case, he can check himself out to work, but he has to be “home” at a certain time every day.  He could check himself out entirely, but even after two years he is not sure he could resist the temptation and end up sliding back.

The men at the Rehab. Center work every day building more rooms, making their own gymnasium, washing clothing, doing kitchen duties and cleaning in general.  Some are on scavenger duty, which means they are allowed to work free at Soriana in return for the food and vegetables that have reached the end of their shelf life.

They would like to expand the facilities to treat women addicts, which is desperately needed.  Every barrio has women on the mean streets as well and they, too, lose everything.  They are worse off than men because they allow themselves to become sex slaves to feed their habit.

The Santa Cruz Rehabilitation Center is a remarkable place.  A lot is achieved there, a support system between patients, a center where there is no place for guilt.  There is only achievement, one day at a time.

Juan Jesus is doing well.  He has started a small construction business, no job too small.  He also drives people to the border and back, a service for those who are nervous driving through Mexico alone.  All the workers he hires are from the Center.  He is still living at the Center, but rebuilding his home for the time when he feels he can handle the world on his own.  Juan speaks perfect English.  Should you require his services, contact Moonie.

Everyone deserves another chance.  Well, almost everyone.