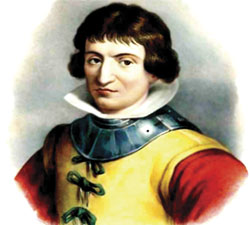 In 1589 Catalina de Erauso’s wealthy Basque family sent their four- year-old daughter to a Dominican Convent, where her aunt was the prioress. When Catalina was fifteen she escaped the convent when her aunt sent the novitiate to fetch a prayer book. Catalina spied the keys to the convent, brought her aunt the requested book, pleaded a cold, went back for the keys and let herself out into the world. Catalina knew that a single girl would come to no good end and so she hid out.

While escaping the convent she stole some material, needle and thread, then fashioned herself some rough male clothing to disguise her budding femininity. In her biography she tells the readers that later, while in Peru, she applied a native poultice to reduce and almost eliminate her breasts, so she could more easily disguise herself in male clothing.

She was an unattractive, big-boned girl, but as an educated boy who could read and write Latin, she easily found employment as a page to the King´s treasurer. When her father came to visit her employer, he did not recognize his daughter, but she realized it was time to move on and the New World offered her the perfect opportunity. According to her autobiography, “I enlisted as a cabin boy in the galleon of Captain Esteben Equiño (my uncle, my mother´s cousin).” The year was 1603 and Catalina had turned eighteen; during the journey to Cartagena she was promoted to her uncle´s personal service. He did not know that she was the runaway daughter of his cousin.

Catalina adds thief to her survival skills when she steals from her uncle and after some adventures ends up in Lima, Peru where she easily finds a job as a manager of a dry goods business.  For her pay she received quarters, clothing, had a cook and two slaves.  She had a man’s temper and responded to a hot headed rival´s insults by accepting his challenge to a duel. Catalina was victorious, but she was brought to court for murder. Her employer struck a deal with the magistrate and Catalina found herself transferred to another city.

According to her autobiography she was later caught with her hands roaming the body of her boss’s mistress and found it necessary to enlist in the king´s army, but only after she ran her sword through another man and killed him. Along with 1,600 soldiers Catalina was sent to the South of Chile to fight in a native uprising, known as the Arauco War, the natives were never fully subjugated.  As if her soldier´s life of fighting and drinking weren´t enough for any young person she finds herself serving under Captain Miguel de Erauso, her brother, who did not recognize the sister he had not seen since she was a two-year-old. In later years, when she returns to Spain, she meets two more of her brothers and I wondered what they thought of their by then famous transvestite sister, turned soldier. During her years in South America, dressed as a man she used several male names, and only revealed her true identity when confronted with execution.

Several years later she killed her brother when he saw her leave his mistresses home late one night and challenged the lieutenant to a duel.  After killing her brother, an officer in the king´s service, Catalina managed to escape along with two renegade soldiers; “We travelled together in the cold, snow covered Andes of Chile.”  Along the way they nearly starved; to survive they slaughtered one of the horses. Catalina proved to be stronger than her two male companions and the remaining two horses because they all perished of cold and starvation.

“I recited the rosary and commended my soul to the Holy Virgin and her glorious husband Saint Joseph.” The Virgin must have taken pity because Catalina is found and taken to a hacienda where a widow restores the wayward soldier´s health. However, the widowed landowner wants Catalina to repay her kindness by marrying her half-breed daughter. “The daughter was very dark, and ugly as the devil, very contrary to my taste, which was always the pretty face.” These are Catalina´s words. As she was preparing for marriage to one woman she is pursued by another. In her best interests Catalina says; “I mounted the horse and disappeared.”

More adventures, like helping to quell a rebellion, gambling and dueling, being condemned to death and receiving a last minute pardon all add to the unbelievable, but true tale of the cross-dressing nun. Actually she never took her final vows and so to call her a nun is technically incorrect, but in reading about Catalina she is often referred to as a nun, or former nun.

Later, she is severely wounded when fighting ensues during a card game, where she killed another gambler. The treating physician refused to operate on Catalina unless she confess to a priest in case she died during the operation. Accordingly she confesses her sins, including cross dressing. By order of the bishop of Lima, Peru two midwives came; “They examined me   and found me to be a virgin, intact as the day I was born.”

In 1624, at the age of thirty nine, Catalina returned to Spain where she secured an audience with King Felipe IV, who granted her a handsome yearly annuity because she had served his interests so well in the New World. After all, she was a decorated soldier, fought indigenous tribes who refused to become subjects of the King and follow the teaching of the Catholic Church, and she had helped quell a rebellion, explored the Andes and promoted the economic ties of South America with those of Spain.

Who but Catalina would then dare to travel to Rome and petition for an audience with His Holiness Pope Urban VIII, who after listening to the tales of the former convent dweller, murderer, gambler and soldier, “Granted me permission to continue my life dressed as a man.” Of course the Pope did charge Catalina to “live honestly,” which by dressing as a man she felt she obeyed. While in Rome the Italian Pietro Della Valle described her as: “Fond of conversation, tall and strong with masculine looks... face is not ugly but worn by age... more like a eunuch than a woman. She dressed as a Spanish man, with a sword, more as a soldier than a courtier.” 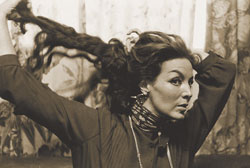 Of course Catalina could not stay in a civilized society; she craved the adventures of the New World and sailed to Mexico where during the final years of her life she successfully operated a transport company conveying goods by mule train from the Port of Veracruz to the Capitol of Mexico. As a mule driver she continued her life as man able to gamble, fight and earn a living. Catalina died on one of her business trips, not from the sword of a quicker or more powerful person, but from contracting an illness.

Much has been written about this unusual and strong woman and several movies have been made. Maria Felix starred as Catalina in The Soldier Nun, but because Maria Felix was so lovely and feminine the movie was not believable. During the 1980´s there was a television series and later a video game based on Catalina´s life called Unchartered Waters, which seems quite appropriate for the woman who lived life as she desired and without regrets.