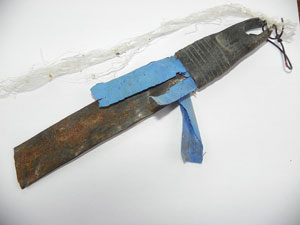 Traveling through back streets of Tepehua five years ago could be a hazardous journey, a journey undertaken by a small group of women who were going to start a Community Center, full of enthusiasm they explored to see the need of the people. Obviously unwelcome by the inhabitants...a home-made knife was thrown that embedded itself into the tire well of their car. It took awhile to break the point off the knife to remove it so that the wheel could turn without scrapping the tire. The writer doesn’t remember fear, just surprise. And had the audacity to question why some-one would do that.

The photo above is the souvenir of the time before small change made big changes. It took small change to make the once a week breakfast in the Tepehua Community Center....but since then the dynamics in every aspect of the families lives are different. Not all of course...but most, with tragedies and joys along the way. Those young teens who threw the knife now play soccer at the Center.

Alcoholism and poverty are bed fellows in Tepehua, but the introduction of a better way has slowed that down, although still losing teens in that direction.  In the Santa Cruz rehabilitation Center the youngest inmate is 12. He was admitted by loving parents...most teen alcoholics belong to dysfunctional families in Tepehua, so there is no intervention.

Forty-year- old Maria was an alcoholic, it helped her make money on the mean side of the streets as a prostitute...by 45, her organs were closing down due to poisoning of the system and she was slowly dying of cirrohosis of the liver. In her damp cement room with no windows and only a door for ventilation, Maria lay waiting. A young man and close friend, drinking buddy, helped with her medication...this writer visited daily bringing medication and soup. A final dose of morphine helped her let go of a life that had been less than kind, and a family mourned.

But in her death she saved lives. Those that helped her die...also alcoholics, they checked into the Santa Cruz rehabilitation center, and have been there for two years. One is now running his own little business from a beat-up old truck. He had lost his entire family to alcohol, but now has the right to love his children again, not from afar but visitations, which take place at the center.

People who suffer from inequality due to their financial status and social standing are those “in poverty,” meaning those who live in a substandard state according to normal society.

Alcoholrehab.com states:  Research has it there is a strong association between poverty, social exclusion and problematic drinking, long term unemployment, no access to health facilities, general despair and depression, all a factor that is the cycle of destruction, when you have nothing and no future, there is nothing to lose.

The Communty Center of Tepehua has proved that just one person reaching out to another can make a difference. No matter how big the problem, one small gesture can change some-one’s life forever. Please reach out. The life you save could have been your own.

Moonyeen King. President of the Board for Tepehua