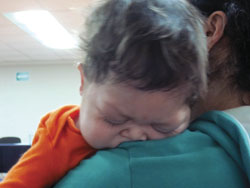 Programa pro Niños Incapacitados del Lago’s column was “on vacation” over the summer, but there was no vacation for those volunteers who work at the “clinics” every other week to reimburse our families for their medical expenses. Illness doesn’t get a vacation, unfortunately, and the Program has enrolled approximately ten new children over the summer.

This little bundle pictured here is Christopher, now 1 year 2 months old.  Christopher’s parents enrolled him with us in July 2014, but we weren’t able to actually see him until late February of this year. Why? Because he was in the hospital all of that time fighting for his life.

Christopher was born with a condition known as gastroschisis; in laymen’s terms the intestines are outside the abdominal wall. This is caused by the failure of the abdominal wall to fully close during gestation, occurring in 1 out of 5000 births. There is no known cause, but many babies with this condition are stillborn.

Here is the kicker:  an ultrasound was done during pregnancy but the condition somehow was not “seen” and not repaired in utero as is very possible. Thus, the poor tyke almost didn’t survive.  As I said, he spent the first nine months of his life in the hospital and had his first surgery at five days old. A second surgery was required to retie the colon, but Christopher developed so many other complications that this procedure had to be postponed until December --with a successful outcome.

He developed an eye infection (and several other infections), high fever, and had to have a feeding tube placed for nourishment and another catheter for his medicines. His father told us there were “tubes everywhere.”  To treat the eye infection his eyes were kept bandaged for almost a year, and to this day he can’t tolerate bright light.

His parents and grandmother were with him 24/7 during those first nine months. Once home in late February his mom and dad had to be constantly vigilant for any sign of problems with his surgeries and eyes, and if there were a problem, the doctors told them to bring the baby back to the hospital immediately.  You can imagine the many late-night trips back and forth to Guadalajara. Fortunately and thankfully Christopher’s doctors and other caregivers were excellent. One of his doctors started calling him “my miracle baby” because he was so close to death many times, but each time was able to rally.

In April he was finally able to tolerate lactose-free formula and began gaining a bit of weight. The eye infection, however, was still active and some ulcerations developed on the cornea of one eye. He was given morphine to help with the pain but as is the case with most patients, he started to become addicted to it so had to be withdrawn gradually from the drug.  (He is fine now with regard to not needing morphine anymore.) Christopher’s parents are delighted with his progress but know there is a long road ahead until the little boy is completely healthy. We certainly hope to see him in that state very soon.

If you would like to meet one of the children we help with medical expenses, please attend our monthly meetings the second Thursday of each month at 10:00 a.m. in one of the conference rooms at the Hotel Real de Chapala in La Floresta. You do not have to be a member to attend and you may even wish to help us as a volunteer.