A Woman In Ajijic 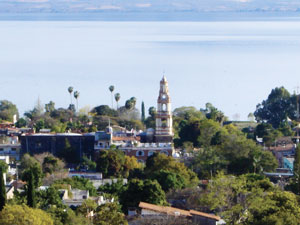 Once we name something, we no longer see it—John Fowles

The woman’s day began like most, but would end like no other. A black rebozo, stretched tightly around sloped shoulders, shielded the tiny woman’s body from an unusual January chill. Her most treasured possession, it served as a wrap by day and a bed cover at night. During funerals, it became a shroud. The brown-faced woman felt grateful she owned such a marvelous piece of clothing.

Where is the sun, she wondered? The sky, overcast and dark, seemed unusual. Perhaps this is an omen, she thought. A strong wind blew into Ajijic on that cold winter morning, in the year 1946. Winds of change also stirred the air of the tranquil little village perched on the northern shore of central Mexico’s Lake Chapala.

At five o’clock that morning, the woman responded to a secular llamada or summons. A man mounted on the roof of a molinillo, or neighborhood mill, located west of the Main Plaza, blew loudly into a European-style hunting horn signaling for villagers to bring the corn they’d soaked overnight for grinding and making tortillas.

The woman lingered dreamily in dawn’s half-light while madrugadores (early risers) lined up at the mill. She arrived sleepy-eyed, half an hour later, to wait among familiar faces. Surrendering her bucket, she waited patiently while the wet kernels were ground into a moist corn meal. She carried the life-giving “masa” back home, towards the plaza.

The woman would pass two churches on her way home. What shall I do, she lamented. Something must’ve been bothering her. Something to do with those churches. Passing a fountain, where women filled jars with drinking water piped down from nearby mountains, she overheard the señoras gossiping and sharing stories with neighbors while their young children frolicked and laughed nearby.

The woman soon became lost in her own thoughts. On the mountain side of the plaza, the Chapel of the Virgin of the Rosary stood like a stone fortress. A quiet, intimate church and the woman’s favorite sanctuary, she often knelt or sat inside, alone or with other souls, losing and finding herself in quiet meditation.

She walked past the plaza’s flower-bordered bandstand, beyond a second fountain. The woman felt a sense of guilt and shame, but continued down Calle Parroquia towards Iglesia San Andrés. She eyed a clock tower dwarfed by the church’s four bell towers. A novelty that hadn’t yet worn off, it cost parishioners $8,000 pesos (no small sum in the 1940s). Completed after what seemed an eternity in construction, villagers enjoyed a festive ceremony during which the timepiece was properly blessed.

The new clock worked for one whole day. Then it stopped. A specialist from Guadalajara came to fix it. While working, his hammer slipped and broke the fragile glass facade. Villagers waited patiently for another faceplate. After two years, Ajijic was rewarded with a clock that worked. The woman laughed quietly to herself. Apparently, God wasn’t all that concerned with time. She hoped that the Virgin followed suit.

The woman had a vague understanding about Ajijic’s principal church being dedicated to Saint Andrew, brother of Peter the Apostle. Like her widowed father, both men were fishermen. She’d heard that Andrew was crucified on an “X” shaped saltier cross, but she had no idea that this gruesome detail of history occurred in the country of Greece.

The original church, San Francisco, was built in 1539. Destroyed by an earthquake exactly two hundred years later, Parroquia de San Andres was constructed on the same site. It took ten years to rebuild.

The woman walked down Calle Parroquia towards a church that faced stiff competition for villagers’ souls. Progresso, the general store, was proud of its walls displaying a huge red, white, and blue Pepsi bottle-cap logo. Cultural imperialism was making in-roads into Central Mexico.

An old pick-up truck sat out front, equipped with wooden side racks along its bed to protect fruits and vegetables from spilling out. It also sported an extra-heavy metal grill, a burrera used to move obstinate burros out of the way.

Carta Blanca advertised its cerveza in fading, flaking letters. Beyond this sign, in freshly-painted script: Restaurante Transito. The proprietress compensated for her quirky first name, an obscure reference to traffic, by preparing the most delectable breakfasts in Ajijic.

The woman turned a corner onto Calle Marcos Castellanos and a quick right put her on Calle Guadalupe Victoria. This street was named after Mexico’s first President, General Guadalupe Victoria. Manuel Félix Fernández created this symbolic name for himself during the revolution leading to Mexico’s independence from Spain. Guadalupe, giving thanks for what he claimed was the protection of Our Lady of Guadalupe. Victoria was a testament to victory for the cause of freedom.

The church’s largest bell announced the first call: a single clang, followed by a brief pause, then a rapid series of rings, another pause, and a final single clang. Mass would begin in half an hour.

The woman felt another deep pang of guilt. Attend mass or acknowledge her personal desires. Obey her religion or listen to her inner nature. The woman never missed mass, only once when she was horribly sick. Her friends and neighbors would wonder why she wasn’t at church. They knew her brother and his family was coming to visit from Guadalajara; but, they couldn’t begin to imagine or comprehend the repercussions this visit might have on the woman’s destiny. She had thirty minutes in which to make her decision.

The heavy bucket wasn’t her greatest burden. She passed a leafless tree and then a tall palm that stretched all the way to the top of the church’s second bell tower. She walked along a line of one-story houses long since replaced by Hotel Italo. The woman didn’t comprehend the mysterious talking wires above her head, telephone lines that carried a person’s voice from the village post office all the way to Mexico City.

The woman strode stoically down the middle of a wide dirt street because people seldom used tile and brick sidewalks. Walls along this street, and most others, were painted brown, two feet above the sidewalk, disguising mud splashed during the rainy season. She saw three figures, each with a dog: two men in the street beside a full-figured woman. This señora also wore a white cotton dress and black shawl. The woman smiled and greeted her neighbors with an “Adios” before continuing on her way, half a block, to a house with no refrigeration. Three hours of sporadic electricity were available, but only at night.

The daily round of village life, her life, was marked by the pit-pat, pit-pat rhythm of tortilla making; and, the hours she spent in her little vegetable garden with its nearby fruit trees. Simple pleasures bestowed a quiet, self-contained joy.

Her father returned early that day from the lake where he and the other men cast their nets, bringing to shore the famous Chapala pescado blanco, or whitefish, renowned for its delicate flavor.

The old pescador had no way of knowing that the production of white-fish in Lake Chapala would peak, in that postwar year of 1946, at an amazing 149 metric tons before a steady decline set in, the result of increased pollution of the lake, aggravated by unsteady rain patterns, over-fishing, and the introduction of predator carp which will thrive on the eggs and young of the whitefish.

The woman had much work to do.

Antonio was coming from Guadalajara. The childless woman looked forward to spending time with her two young nieces. The woman wanted to honor their visit and make it a special occasion. She’d teach the girls how to shape “masa” into small balls and slap them into thin griddlecakes as their ancestors had done for thousands of years.

Two bells clanged, a pause, a rapid clang of bells, another brief pause, and then two bells rang out. Fifteen minutes until mass. The woman quietly endured the complexity of following two paths at the same time. She prayed to the Virgin for understanding before embracing her natural self.

Then, she decorated her house with fresh-cut flowers from the garden. The family, reunited for one very special day, hugged and kissed, celebrating the joy of being a family. The woman drank a glass of wine and enjoyed it and she reveled in the laughter of her two young nieces. The family noticed a subtle change in her behavior. She seemed more gregarious, more at ease and yet more lively. That night, Antonio, who always avoided his sister, invited the woman to stay with family in Guadalajara. This was the first of many invitations.

In the spring, the woman’s father fulfilled a long-standing promise to row her across Lake Chapala so she could visit the village of San Luis Soyatlan. That summer, the woman accepted her brother’s invitation. On the bus ride to a museum, in the center of Guadalajara, the woman encountered a handsome bus driver and she fell in love. The woman was married one year later. Her first child was born the following spring.