The Life and Struggles Of Cesar Chavez 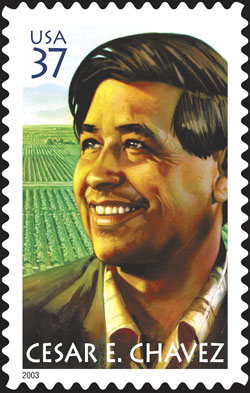 “One of the heroic figures of our time.”

On February 25, 2015, Randy Vasquez died a horrendous death by drowning in a manure pond at the Riverview Dairy, which provides milk for Darigold, in Mabton, Washington. To date, neither Darigold nor the farm owner has reached out to Randy’s widow or his children.

When I was 17, I went to work for an Ohio farm owner who marketed his produce out of a grocery store located in his barn.  I trimmed produce, loaded the truck that delivered goods to a market in the city, and labored in the fields alongside Puerto Rican workers who had been lured to Ohio by the promise of “high wages,” a dollar an hour.

As Felito, Miguel and Oscar became my friends, I learned more of their stories. Their lives resembled those of coal miners before the advent of strong unions. My friends paid rent to the owner, purchased their groceries and necessities in his store. Those who had families to support were trapped.  The work was grueling, the hours long, the pay minimal.

One day I overheard the owner’s adult son talking with a deliveryman. “These Puerto Ricans will stay and work as long as you can keep them dumb,” he intoned. “Once they earn enough money to buy a car, they get out and see what kind of money other people are making and they won’t stay.”

I learned two things that summer: In union there is strength, and knowledge is power.

The lot of agricultural workers has always been a hard one.  They were one of the only groups of private employees excluded from the 1935 National Labor Relations Act, guaranteeing Americans the right to form unions.  Farm workers have lived in migrant camps, shacks, even tents and been denied basic amenities.

Beginning in the 1860’s, waves of immigrants were recruited in California as farm laborers: Chinese, Japanese, East Indians, Filipinos, desperate “Okies”, fleeing the dust bowl of the 30’s, and Mexicans. As the labor pool increased, wages decreased and conditions worsened.

Cesar Chavez was born in 1927 in Arizona, the son of a small farmer and businessman. His was a carefree boyhood until his family lost everything during the Great Depression, forcing them to wander the California countryside, working for pennies an hour. He attended 36 different schools as his parents moved from job to job. He knew the sting of both racism and poverty, being denied entrance or service at stores, restaurants, schools, and theaters because of his color. Some of his teachers assumed that he lacked intelligence because he was Mexican.

Cesar, a World War II veteran, possessed only an eighth grade education, but under the tutelage of an activist Catholic priest Father Donald McDonnell he read carefully and obsessively the words of St. Francis of Assisi, Alexis de Tocqueville, labor leaders like John L. Lewis and Eugene Debs, and Mahatma Gandhi.

In 1952, Chavez was recruited for the Community Service Organization, a Latino civil rights group. He rose to become its president. He recognized, however, that the only way to improve the lives of farm workers was to organize a powerful union and that only the nonviolent techniques of Gandhi would be effective. In 1962, he left CSO and co-founded the United Farm Workers Association.   The goals of the union were modest, demands for clean water, decent housing, toilets in the fields, health benefits, collective bargaining without interference from police or corporate growers and a cessation of insecticide spraying while workers were in the fields.

Organizing immigrant agricultural workers was one of the most daunting activities for meaningful change in America.  Chavez and his followers met with hostility, even violence. Some growers imported strikebreakers from Mexico, “braceros” desperate for any kind of wage, to break UFW strikes. They also hired thugs from the lowest rungs of society, violent men of whom Jack London once said, “When God had finished the rattlesnake, the toad and the vampire, he had some awful substance left with which he made a strike breaker.”

Minority farm workers were often victims of racial violence. Local officials seldom prosecuted those who attacked farm workers. Strikers and protesters were often harassed, intimidated and beaten by thuggish growers and their hired toughs, including members of the corrupt Teamsters Union, who used brutal, fascistic methods in their attempts to take the place of the UFW.  The victims were often arrested.

Chavez and members of his union were also victims of red baiting by growers, police and the local press. During the 1950’s, a time of anti-communist paranoia and McCarthy-ite hysterics, any challenge to the status quo was considered Communist inspired. To speak openly of civil rights, police brutality or voter registration was to invite being labeled Communist.  On more than one occasion, Chavez, a vegetarian and animal rights advocate, endured lengthy, highly publicized fasts to promote his causes.

While California produces most of the nation’s fruits and vegetables, consumers are generally unaware of where their food comes from. The public had to be reached through the media. Utilizing non-violent techniques of Gandhi, success came, but it came slowly and at great sacrifice. It took decades, for instance, to finally ban “el cortito”, the short-handled hoe, which forced workers to stoop all day while harvesting crops.

Membership in the UFW grew, and similar unions arose in Texas, Wisconsin and Ohio. In the 1970’s, the Salad Bowl Strike was the largest farm worker strike in history.

One major issue was the spraying of pesticides while workers of all ages were in the fields. Pesticide poisoning was so severe that nearly a thousand wells around Fresno were closed. After exposure to spraying, hundreds were sometimes hospitalized with low heart rates, shock and vomiting. Cancer clusters, including leukemia, began to appear among children of farm workers in small towns near Delano, California.

In the 70’s, Chavez negotiated an end to spraying DDT and other toxins on grape and lettuce crops. Still, in the 80’s, hundreds of people became ill after eating watermelons sprayed illegally with Aldicarb, a toxin that is now strictly regulated. Such incidents led to UNF inspired boycotts to eliminate chemicals that could cause illness and death among farm workers. The UNF helped Monterey County enact the nation’s toughest pesticide-use laws, which prompted statewide regulations.

In 1965, the UFW joined a grape strike initiated by Filipino workers. The ensuing nationwide grape boycott lasted for five years. As public awareness of the plight of farm workers became evident, people across the US and Canada joined the boycott. Senator Robert F. Kennedy expressed support for the strike, but Governor Ronald Reagan called it immoral and contemptuously slowly ate grapes in public.

In the end, Chavez cautioned humility in victory. Author/ screenwriter Alejandro Grattan-Dominquez reports being present while Chavez addressed an audience, urging not hatred and violence but conciliation and forgiveness.

While the struggles of Cesar Chavez and the United Farm Workers accomplished much to improve conditions, life is often harsh for agricultural workers. In 1985, workers were found to be paying 25 cents an hour to live in caves on the Jose Ballin Ranch. Even now, the tragic death of Randy Vasquez cries out for justice.