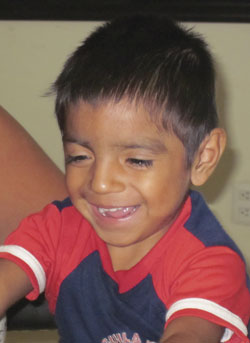 You first met Oscar just shortly after he joined Niños Incapacitados in July 2012. He was 9 months old. He is the youngest of five children and lives with his family in Jocotopec. Oscar was diagnosed with Sindrome Cornelia de Lange often termed as Bushy Syndrome and more commonly referred to as Amsterdam Dwarfism. Niños Incapacitados sees its fair share of rare and unusual disorders however Sindrome Cornelia de Lange is a first for us.

Sindrome Cornelia de Lange is a genetic disorder that can lead to severe developmental anomalies affecting both the physical and intellectual development of a child. Exact incidence is unknown, but it is estimated at 1 in 10,000 to 30,000 newborns. Statistically it affects both males and females alike.  Cornelia de Lange syndrome is a developmental disorder that affects many parts of the body. The features of this disorder very widely among affected individuals and range from relatively mild to severe.

This syndrome is characterized by slow growth before and after birth, intellectual disability that is usually severe to profound, skeletal abnormalities involving the arms and hands as well as distinctive facial features. The facial features include arched eyebrows that often grow together in the middle, long eyelashes, low ears, small, widely spaced teeth and a small upturned nose. Many affected individuals also have behavior problems similar to autism.

Additional signs and symptoms can include excessive body hair, an unusually small head, hearing loss, short stature, and problems with the digestive tract. Sometimes those affected are born with an opening in the roof of the mouth called a cleft palate. Seizures, heart defects and eye problems have been reported in people with this condition as well.

Oscar is now four and a half and is doing extremely well.  He is a very happy child and as Mom would tell you, a very active one. At the age of two he was fitted with hearing aids.  This made him a little cranky as the new sounds and noises were foreign to him. Six months later he had adjusted well like a little trouper. Months later, tests indicated that his eyesight was not good so he was fitted with glasses which he thinks are cool and loves to show off his new look. He attends speech therapy twice weekly at the School for Special Needs Children in Jocotopec and goes for physical therapy at the Rehab Center.

In the past many children with Sindrome Cornelia de Lange did not live past childhood as their medical needs were not known.  However therapeutic interventions, such as speech therapy, occupational therapy and physical therapy can help the child with this syndrome reach his or her full potential. Oscar is closely monitored by his doctor. He has undergone both genetic and hormone testing and will continue undergoing monthly bloodwork as well as x-rays to monitor his skeletal frame.  Oscar is not on any medications other than an antibiotic for a recent bout of flu. To date, Niños Incapacitados has reimbursed the family $52,000 pesos.

As Oscar develops it will become more evident as to the degree of his physical/developmental manifestations and whether or not he will fall in the range of mild to severe. For the time being, he continues to do well and enjoys his new friends at school.

As Director of the Jocotopec clinic thank you for the opportunity of presenting some of our children to you.