The Idols Of San Juan Cosala 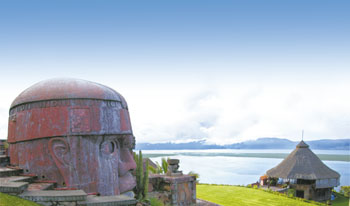 Once upon a time, and not so long ago, lived a boy and his grandmother in a village called Ajijic along the lake. His name was José. They had a grocery store so small and with so few groceries that we would wonder why they called it a store. A dozen paraffin candles, a few pounds of coffee, beans, corn, sugar, ropes, green peppers, soap, onions, ten bottles of soda pop, half a dozen cans of sardines and of hot green peppers, perhaps one egg or two, were for sale.

His grandmother could no longer read the numbers on money or on the weights, and José would show her: “These two weights you put on this side of the scales when anyone wants to buy ten centavos of coffee.” He kept store for her most of the time, and always while she went to the mill to have the corn ground for their corn cakes, or while she washed their clothes up at the spring.

One Sunday José and his friend Paco decided to go up in the mountains. Paco’s father lent Paco his burro. Climbing out of the town they soon left behind them cobblestone streets and small mud-brick houses with fences of cobblestones piled on each other, and gardens of fruit and flowers. In the mountains they climbed until they reached the rich black fields where wild flowers grow. Here the two boys picked St. John’s roses to take home.

Paco wanted his flowers for rice pudding but José thought maybe his grandmother could use his for her eyes. The boys tied their big bouquets to the high-peaked crowns of their hats, climbed on the burro again and started home. On their way they met Cholé driving home her father’s big black ox, which had been grazing in the upland pastures all day. Cholé was a ragged-looking girl of fourteen, much poorer even than José. She had two dresses and one pair of shoes and a pair of stockings worn out at the feet. Mostly she went barefoot to save her shoes and stockings for church.

Cholé told them that more than anything in the world she wanted to earn some money to go in the bus to Guadalajara to find work, so that she could wear nice clothes and help her family. Her father and mother were willing, but she didn’t have even two pennies.

When José told her what his flowers were for, she shook her head. “It will take more than St. John’s roses to cure your grandmother’s eyes. It is not sickness, but old age that makes her sight dim, and for old age, there is no cure. What she needs is a good pair of glasses. In Guadalajara, they say there are all kinds of spectacles for two and three pesos.”

That night as José lay on the straw mat that was his bed, he wondered how he could earn two or three pesos. He had not told his grandmother the real reason he had brought her St. John’s roses, and she had cooked rice pudding with them. While José ate it, he nearly choked with his secret disappointment.

The next day someone told him how he might earn some money. “Why don’t you go to San Juan on San Juan’s Day? They say that on that day, the idols come out of the lake, and if you can find a few and sell them, you can earn money!”

The village of San Juan was only five miles away so that in a few hours José could walk there. He decided that if he found any idols he would sell them in his grandmother’s store. That would make the foreigners come to buy and maybe they would purchase some soap, or candles, or an egg, after they once came in for an idol.

He remembered what their school teacher had told them about the history of the lake. “Once upon a time,” The school teacher had said, “A long time ago, San Juan was the capital of the Indian Kingdom of Cutzalan. There were a great many people there. The people worshipped many gods. One of them, called the unknown God, had no name. The Indians used to make idols and images of stone and throw them into the lake for the Unknown God. They also made tiny jars with three handles. They pierced their ears or noses and let drops of blood fall into these tiny jars, and when after a few weeks or months, when the jars were full, they threw them into the lake as sacrifices to him.” José decided that he must tell Cholé about this, too. Perhaps she could find enough idols and carved jars to earn money to go to Guadalajara!

On San Juan’s Day, José and Cholé set out for the lake. They got up earlier than the earliest fisherman and walked and walked in the dark, on their way to San Juan. About daylight they arrived. They went at once to the beach and sat down, to wait for the idols to come out of the lake.

A boat from Chapala came in, with its big square sail, bringing a load of cow peas and rope to trade for papayas. The bus to Jocotepec went by. Fisherman put out with empty nets and came back with full baskets. The men were up in the mountains working in the corn. And the idols had not come out of the lake!

Cholé began to cry and José wanted too, but he was nearly a man, so he whistled instead, a thin, unsteady tune. Suddenly José gave Cholé a great clap on the back that nearly upset her.

“Cholé!” he cried. “I bet that story about the idols coming out of the lake on San Juan’s Day is what our teacher would call a myth! I bet it isn’t even so. It is the end of the dry season, though, so the lake waters are at their lowest and that’s why they say the idols come out. I’m going in!”

“But you’ll get your clothes all wet!”

“Who cares?” cried José. He took off his hat and his blanket, and his overalls, and red waist sash. He rolled his white cotton trousers up as high as they would go, and waded in. Then he stubbed his toe on something hard, felt for it, and pulled it up out of the water. Only a stone. This happened three times. But the fourth time the object was carved. An idol!

Cholé was so exited and happy that her tears dried up. Slipping off her dress and wearing the white cotton slip that all the women of Ajijic use as a bathing suit, she waded in, too.

In an hour or so they had all that they could carry: idols, little jars for blood sacrifices, and stands for the jars, ugly small objects called naguales—witches who change themselves into animals whenever they will it.

José and Cholé sat in the hot sun until they dried off, and then put on the rest of their clothes and started home. On their way the bus picked them up and gave them a ride to Ajijic. The driver knew José because his bus always brought coffee out from Guadalajara to the grandmother’s store.

Nearly a month later, Cholé climbed onto the same bus on her way to Guadalajara. She was wearing her best dress and her shoes and stockings. Folded in her handkerchief she had ten pesos to buy new clothes and pay her expenses until she found work. José and his grandmother came out to wave good-bye to her.

Jose’s grandmother looked proud and happy in her new spectacles which, as Cholé rode away, sparkled and flashed in the bright sunshine.