The Little Lady Who Made Publishing History 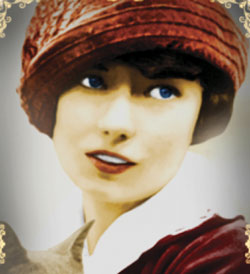 It started with a phone call from a middle-aged attorney in Atlanta to a top editor with the Macmillan Publishing Company in New York City. The caller had heard that the editor was planning to tour the South in search of interesting manuscripts, and would be stopping in Atlanta for a few days. Seems the lawyer was married to a woman who had been writing a novel for the past several years, and had become so obsessed with it that he feared the effort had become detrimental to her health. Would the editor meet with her just long enough to politely reject the book, and thus grant the lady some long-sought-after peace of mind?

The publishing executive agreed on one condition: he would meet the woman only in the lobby of a hotel in Atlanta, rather than up in his room, where it might be difficult to get rid of her. Some days afterward, the lady was sitting primly on a bench, waiting for what she hoped would be her rendezvous with destiny. Years later, the editor would recall, “She could not have been even five feet tall, for her shoes fell far short of touching the floor. Next to her was a manuscript in several cardboard boxes which rose a full foot off of the bench. It totaled, she told me, more than 2000 pages! Dismayed, I was preparing my exit speech when she began to talk in the most shy, but melodious and lyrical manner. Her southern graciousness so impressed me that I agreed to have a porter take the boxes up to my suite, telling the lady I would read it.  I planned, however, to just skim through a few pages and then leave the manuscript with the hotel, along with a polite note of rejection for its charming author.”

That night, the editor began to read the manuscript, noting that many of its first pages were tainted with what seemed coffee stains and even cigarette burns. When his train finally pulled into New Orleans, the last stop on his southern search for new literary talent, he was still reading it. One day later,  placing a call to NYC—and in what must have been a “Stop the Presses” clarion call—he advised his company that he had found a book that might make literary history. Oh, yes, the name of the author? Margaret Mitchell . . . and the book was something called Gone with the Wind.

The original press run was a modest 10,000 copies, but when the novel was selected by the Book of the Month Club, then received glowing full-page reviews in  The New York Times and New York Herald Tribune, the press run was upped to 40,000 copies. Two printing companies were working three eight-hour shifts to meet the demand as the novel was selling more than 4,000 copies a day. In 1936, the American Booksellers Association named it “The Most Distinguished Novel of the Year,” and soon thereafter it would win the Pulitzer Prize for Fiction. By the end of 1937, Gone with the Wind had sold 1,375,000 copies—and this in a nation with a population of only about one third of what it is today!

With such mind-blowing acclamation, could Hollywood be far behind? Of course not—and again Margaret Mitchell got lucky, for in a ferocious bidding war between all the major studios, Producer David O. Selznick was the eventual winner. When the film finally held its world premiere in Atlanta in 1939, the author tearfully gave great credit to Selznick, and Vivian Leigh, who would win an Oscar for her performance as “Scarlett O‘Hara.” In time, the film became the most financially successful motion picture ever made, as well as one of the most honored, while the book itself became a huge international best-seller, eventually published in no fewer than three dozen foreign languages.

To close on a personal note, sometime after my mother died, I found, in going through her personal possessions, a copy of Gone with the Wind in Spanish, its pages literally falling away from the book’s tattered binding. Apparently, like millions of   women all over the world, she had been deeply touched by an indomitable heroine who would never settle for anything less than all she could give nor all that she could ever become.