Thanksgiving Comes but Once a Year—Credit Where Credit is Due 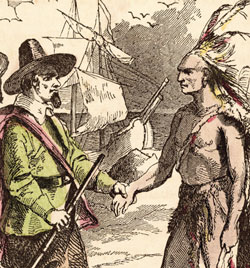 Thanksgiving should be a time to remember Native Americans for the cornucopia of foods and medicines that we take for granted in our daily lives. We have all been regaled with the story of the “Indians” teaching the so-called Pilgrims to grow corn.  Corn is only part of the story. The traditional Thanksgiving feast consists of roast turkey, mashed potatoes, sweet potatoes, pumpkin pie and a selection of tortured concoctions composed of cranberries. None of these were familiar to the first European arrivals.

Our medieval ancestors, subsisting on coarse bread and a few garden vegetables, were typically invited into the manor house annually at hog-butchering time, where the choice cuts went to the nobleman and the organ meat, the “umbles,” was chopped up and baked into a pie for the serfs, creating the term humble pie. Nutrition improved as a result of contact with Native Americans.

The Inca, whose highly advanced civilization was destroyed by small pox and Spanish treachery, were the first to cultivate potatoes and sweet potatoes. Squash and pumpkins were also Native American crops. Algonquian peoples harvested cranberries from northern bogs. The main course, the turkey, was a strictly American bird. The Inca also gave us the tomato, now a vital ingredient in everything from soup to salsa. Imagine pizza, brought to Italy from Palestine by Roman legionnaires, or spaghetti, brought to Europe from China by Marco Polo, without tomato sauce.

The nutritional gifts of Native Americans are nearly equaled by their medical treatments. During the winter of 1535, Jacques Cartier’s expedition to explore Canada was frozen in the St. Lawrence River. Soon, his men developed symptoms of scurvy. Fifty died. Aware that the locals were unaffected, Cartier consulted Dom Agaya, son of a Huron chief, who prescribed tea brewed from the bark of white cedar, high in vitamin C. Within eight days, the crew had recovered.

At the time of first contact, Native American treatments were far more effective than European medicine. They gave us witch hazel and petroleum jelly for rashes and quinine for malaria and yellow fever, ailments that arrived with enslaved Africans. The ingredient in Ipecac was used to treat dysentery and iodine from kelp to prevent goiter. Salicin, the ingredient in aspirin, was extracted from willow bark, to treat aches and fevers. They invented the tourniquet to stop bleeding, and sutured wounds with bone needles and human hair. Curare, applied to the tips of arrows of rain forest hunters, is used yet to relax abdominal muscles during surgery and has been used to treat lockjaw. Coca leaves, from which Novacain is derived, were chewed by the Inca to provide energy at high altitudes. Native Americans set broken bones using casts made of feathers and clay, and discovered herbal remedies for everything from constipation to labor pains.

Borrowing from the Iroquois confederacy, Benjamin Franklin recommended the concepts of federalism, separation of powers, impeachment, and decorum in discourse to the Constitutional Convention. We owe much to the first peoples of this land, and Thanksgiving is a time to remember their many contributions. Alas, we have repaid beneficence with cruelty and destruction throughout most of our history. Cartier showed his gratitude to Dom Agaya by kidnapping him, along with his father the chief and other family members, and dragging them back to France where they subsequently died homeless.