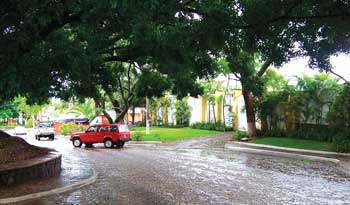 This past summer we returned to Mexico during the rainy season and I can tell you it is somewhat over rated. My wife and I usually miss the rainy season because we return to the states each summer but continually hear from our friends that it is the best time to be at lakeside. Really? Sleep deprivation due to the constant thunder claps replaced my wife’s usual hormonal complaints. It took awhile to get accustomed to the lighting in the bedroom, I kept thinking it was a burglar’s flashlight.

And when the rain would gush through the gargoyles and splatter on the ground outside our bedroom, it felt like subliminal water boarding. The thunder claps and sleep deprivation make for strange hallucinatory bedfellows at three in the morning. Never mind that my eyes resembled road maps in the morning. One look at me and my friends could tell I was either on a binge the night before or I was a victim of the rainy season.

Occasionally events got cancelled, which never happens in the sunny season. My cotton shirt and pants had shrunk after being caught in the rain one afternoon. That was okay, but when my friend’s saw me wearing them several days later and thought I had gained weight that flustered my ego. My blue car was now a splotchy brown, my shoes were muddy, heavier and curled at the toes, my hair was frizzy, and my walk around water pools was more measured and deliberate. We didn’t have enough cooking pans to catch the leaks dripping from our flat roof. Our washed out expensive plants were all gathered at the end of the garden sharing the same grave heap. On top of all that, the scorpions came inside out of the rain. Waaaaa!

After awhile I accepted the rainy woes together with the disconnected intermittent internet and telephone service. At least with all the lightning I could see where I was going during the night to reach the bathroom. Where else can you find a free dazzling light and sound show over a beautiful lake at night? The reflections can light up one’s face and the rumble of the clashing clouds can rock one’s soul. The jolt is like a body stone; you feel and see the ecstasy of the weather around you but you can’t control your reaction to it.

The rainy season gives the lake its annual infusion of much needed water. The farmers are dancing, the car washers are dancing with the farmers, and the fishermen give thanks to their rain gods for another rainy season. The mountains give up their brown dreary winter overcoat and replace it with an emerald green cape sprinkled with wild flowers. The mountain waterfalls come to life in the oddest places showing their power and letting out their roar as they cascade down to reach their centuries old arroyo. The construction dust has a terrible time flying around in the rainy season. When I’m caught in the rain I can reduce my twice weekly showers to one. The smell of dampened fresh air is so invigorating that it fills our mountain side home with life. Our toiling sprinkler system gets a much needed rest from its winter load.

One day while walking in the rain I realized I’m not here to change Mexico’s weather patterns, or to change Mexico’s way of life. I’m here to absorb it; I’m here to embrace it. Would I rather be back in New York listening to my clients barking at me about some office dribble? Of course not. Mexico is my adopted home along with the rainy season and all the wonders she offers that I can’t find back in New York or anywhere else. Rain, thunder, lightning? Bring it on!